Back to Books By Dr. Krishna B Misra 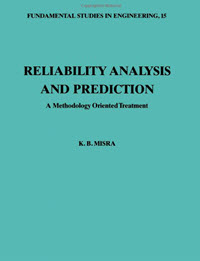 Apart from some early work on the reliability of telephone systems, emphasis is placed on reliability during 1940/45 war, where failure could be disastrous for the last thirty years there have been numerous books published on ” Reliability”( some 130 are listed in K.B.Misra’s book ). The vast majority have been largely mathematical and usually specific to one section or aspect of reliability. For many years there has been the need for a comprehensive volume which would collate and summarize all the knowledge which has been accumulated by experience in reliability movement over this period.

Such a book is now available in K.B.Misra’s ” Reliability Analysis and Prediction : A Methodology Oriented Treatment “. This book now provides the student, researcher or practical engineer, with all the knowledge he requires for his particular application. As a reviewer who pioneered reliability work in electronics for the Armed Forces in the 1940s; has lectured extensively worldwide and has written numerous books, including three books on reliability, the reviewer has studied this book extensively and in his opinion it contains the most complete coverage of any book on reliability yet written. This is illustrated by the chapter headings, as follows: -Reliability Engineering: An Overview; Reliability Mathematics; Reliability Data Analysis and Management; Reliability Prediction from Stress Strength Models; System Reliability Modelling; Reliability Evaluation Techniques; Maintainability Analysis and finally, System Analysis through Fault Tree.

It may be argued that the book is too ‘voluminous’, but there are few books published which are regarded as “landmarks” or “milestones” in any technique or subject. Colloquially, they are known as ‘the Bible’ or fount of knowledge. Such a book for many years was F.E.Terman’s ” Radio Engineering”. We now have a new ‘Bible’- K.B.Misra’s “Reliability Analysis and Prediction: A Methodology Oriented Treatment”. The author is modest in claiming that this book, which is the outcome of his more than 25 years of teaching and researching in the area, is going to fill the gap which has been widely felt by practicing engineers, but there is no doubt that this will be so. The appendices on ‘Some Useful Definitions’ and on ‘ Description Computer Codes’ are particularly valuable.

… the book of K.B.Misra who is an internationally leading specialist in reliability engineering is an outstanding and up to now surely the most comprehensive text on the subject and will find numerous satisfying readers.

This timely book by an expert with 25 years experience, summarizes the latest developments in a subject that has advanced phenomenally in the last three decades and provides the reader with all the methodological tools necessary in one volume. Limitations of models, methods, procedures, algorithms, and programmes are described. The latest developments in fault tree analysis are well covered. Although the necessity, having a high mathematical content, it will be a great value to a wide range of practicing engineers, lectures and students. Each chapter has a comprehensive list of references

This is a beautiful textbook devoted to reliability fundamentals. This book is intended to researchers, students and especially engineers that do not have a previous background of basic reliability knowledge. The effort is made towards presentation of methodologies for reliability analysis and prediction. For example, after laying the basis of reliability mathematics, the author uses the concept to present models for reliability prediction by means of stress –strength approach, then passes from units to systems and reviews the general Markov model among other models.

A complete chapter is devoted to one of the most recently and frequently used method for reliability analysis and prediction: fault tree analysis. Construction, simplification, evaluation of fault trees are the basic steps. The analysis of the results of evaluations, using measures of importance and sensitivity, plays a major role. Example of 45 computer programmes with description of the target computer type, performances and constraints end the book.

The references are very good, oriented mainly to the Anglo-Saxon literature. Each chapter contains references arranged chronologically. At the end of the book there is main list of references. Each chapter has several examples, most of them with numerical calculations. This improves readablity and deepens the understanding of methods. There is good index list oriented to the main topics covered in the book. A final comment contains a less usual but very nice comparison between reliability phenomena and Indian philosophy.